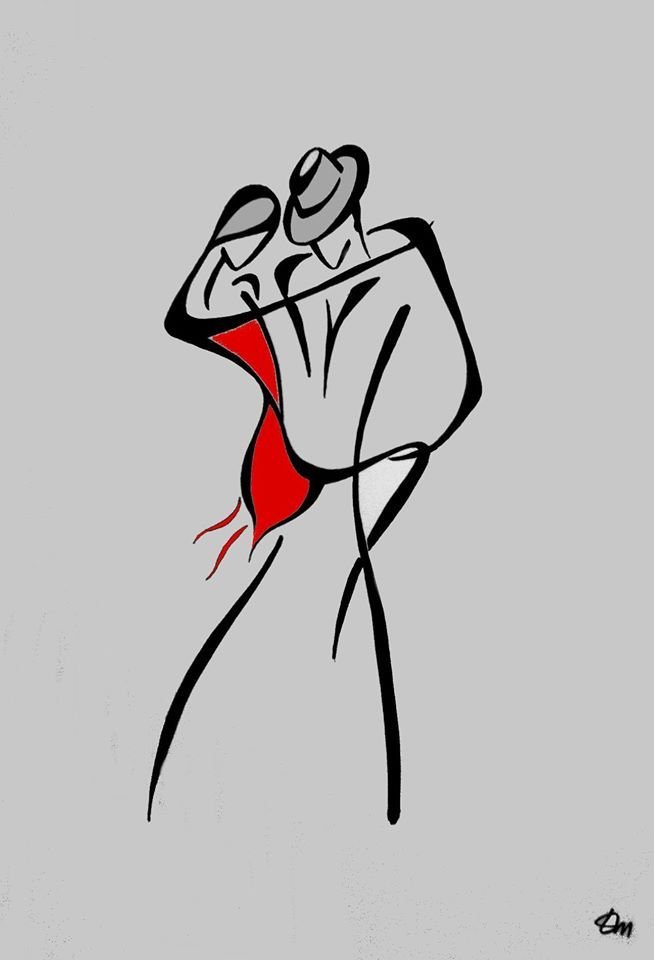 The jive is part of the swing dance group and is a very lively variation of the jitterbug. Jive originated from African American clubs in the early 1940s. During World War II, American soldiers introduced the jive in England where it was adapted to today's competitive jive. In jive, the man leads the dance while the woman encourages the man to ask them to dance. It is danced to big band music, and some technique is taken from salsa, swing and tango. Jive is performed as an International Latin dance.

Cha-cha-cha (sometimes called cha-cha in the US) was delevoped by Enrique Jorrín in the early 1950s, as a slower alternative to mambo. Cha-cha-cha is a flirtatious dance with many hip rotations and partners synchronising their movements. The dance includes bending and straightening of the knee giving it a touch of Cuban motion. Cha-cha is performed for both International Latin and American Rhythm.

Rumba came to the United States from Cuba in the 1920s and became a popular cabaret dance during prohibition. Rhumba is a ballroom adaptation of son cubano and bolero (the Cuban genre) and, despite its name, it rarely included elements of Cuban rumba.[17] It includes Cuban motions through knee-strengthening, figure-eight hip rotation, and swiveling foot action. An important characteristic of rhumba is the powerful and direct lead achieved through the ball of the foot. Rhumba is performed for both International Latin and American Rhythm.

Samba is the national dance of Brazil. The rhythm of samba and its name originated from the language and culture of West African slaves. In 1905, samba became known to other countries during an exhibition in Paris. In the 1940s, samba was introduced in America through Carmen Miranda. The international version of Ballroom Samba has been based on an early version of Brazilian Samba called Maxixe, but has since developed away and differs strongly from Brazilian Ballroom Samba, which is called Samba de Gafieira. International Ballroom Samba is danced with a slight bounce which is created through the bending and straightening the knee. It is performed as an International Latin dance, although most of its modern development has occurred outside Latin America.

The pasodoble originated from Spain and its dramatic bullfights. The dance is mostly performed only in competitions and rarely socially because of its many choreographic rules. The man plays the role of the matador while the woman takes the role of the matador’s cape, the bull, or even the matador. The chassez cape refers to the man using the woman to turn her as if she is the cape, and the apel is when the man stomps his foot to get the bull's attention. Pasodoble is performed as an International Latin dance.

The quickstep is an English dance and was invented in the 1920s as a combination of faster tempo of foxtrot and the Charleston. It is a fast moving dance, so men are allowed to close their feet and the couples move in short syncopated steps. Quickstep includes the walks, runs, chasses, and turns of the original foxtrot dance, with some other fast figures such as locks, hops, and skips. Quick step is performed as an International Standard dance.

The foxtrot is an American dance, credited by a vaudeville performer Harry Fox in 1914. Fox was rapidly trotting step to ragtime music. The dance was originally named as the “Fox’s trot”. The foxtrot can be danced at slow, medium, or fast tempos depending on the speed of the jazz or big band music. The partners are facing one another and frame rotates from one side to another, changing direction after a measure. The dance is flat, with no rise and fall like the waltz. The walking steps are taken as slow for the two beats per steps and quick for one beat per step. Foxtrot is performed for both International Standard and American Smooth.

Tango originated in Buenos Aires in the late 19th century. Modern Argentine tango is danced in both open and closed embraces which focuses on the male leader and the women moving in harmony of the tango’s passionate charging music. The tango’s technique is like walking to the music while keeping feet grounded and allowing ankles and knees to brush against one another during each step taken. Body weight is kept over the toes and the connection is held between the man and women in the hips.

Ballroom tango, however, is a dance with a far more open frame, often utilising strong and staccato movements. Ballroom tango, rather than Argentine tango, is performed in international competition.

Viennese waltz originated in Provence area in France in 1559 and is recognized as the oldest of all ballroom dances. It was introduced in England as German waltz in 1812 and became popular throughout the 19th century by the music of Josef and Johann Strauss. It is often referred to as the classic “old-school” ballroom.Viennese Waltz music is quite fast. Slight shaping of the body moves towards the inside of the turn and shaping forward and up to lengthen the opposite side from direction. Reverse turn is used to travel down long side and is overturned. While natural turn is used to travel short side and is underturned to go around the corners. Viennese waltz is performed for both International Standard and American Smooth.

Waltz began as a country folk dance in Austria and Bavaria in the 17th century. In the early 19th century it was introduced in England. It was the first dance where a man held a woman close to his body. When performing the dance, the upper body is kept to the left throughout all figures, woman's body leaves the right side of the man while the head is extended to follow the elbow. Figures with rotation have little rise. Sway is also used on the second step to make the step longer and also to slow down the momentum by bringing the feet together. Waltz is performed for both International Standard and American Smooth.